You are viewing : Portfolio » 6 Cadeby Road

Having already obtained planning permission for a detached dwelling, the client had applied to Doncaster Council to obtain permission to build a detached garage to the front of the dwelling.

The garage would sit behind the boundary wall and iron railings and the landscpaing plan included the planting of two Silver Birch trees to further screen the garage from view. 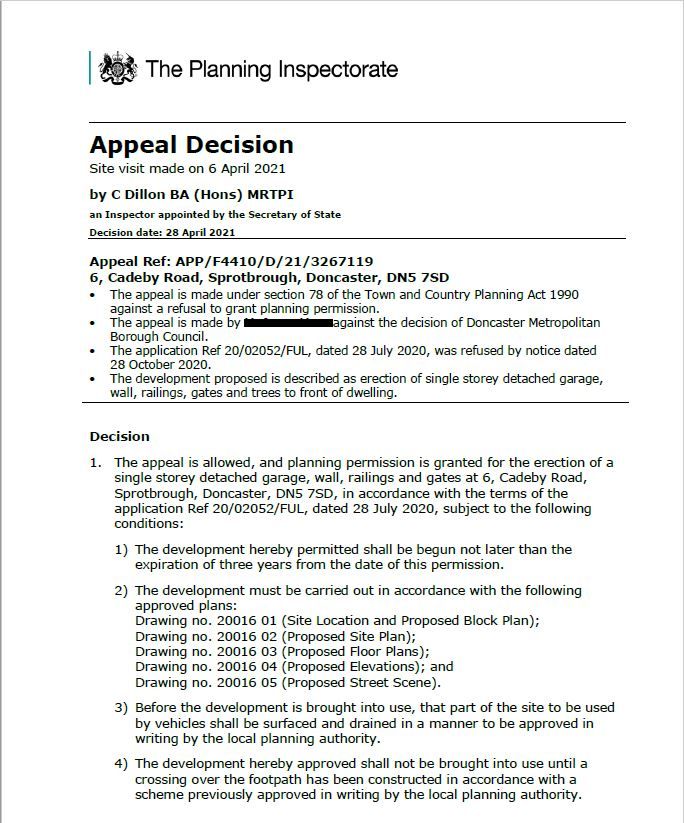 This was something of an unexpected victory.

Having been refused as the Council believed it "would appear incongruent and dominating in this location and cause detrimental harm to the character and appearance of the host dwelling and the street scene" we set to work on discrediting this opinion.

It is becoming incresingly difficult to obtain permission for buildings that will sit in front of dwellings due to the guidance and policies adopted by Local Planning Authorities. In this case however, the garage would be located in the corner of a large plot of land which also had an imposing building as it's backdrop.

This enabled us to make the argument that the street scene included buildings very close to the public highway and therefore the garage would not be incongruent. We included further evidence showing how the garage would be viewed when approached from all directions and these arguments were taken on board by the Planning Inspector. The Inspector's comments highlight the benefit of using a Planning Consultant to appeal a planning decision.

"Indeed, the appeal proposal would change the appearance of the street scene. However, as the appellant’s evidence demonstrates, that proposed change would not lead to an overly dominating or incongruous development which would represent an unexpected, alien feature."

This is where RBA Town Planning sets itself apart with the evidence we gather and submit on behalf of an Appellant.